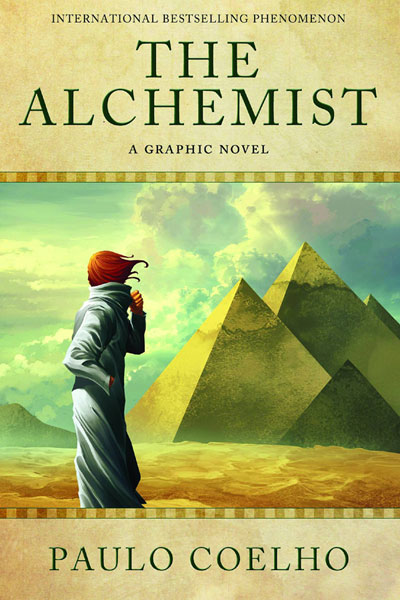 “The Alchemist” by Paulo Coelho is a wonderful worldwide famous novel which teaches us to follow our dream. It also gives us a feeling that “there is something more” that we’ve forgotten and the thought that we are part of something big. In this novel, Paulo states about the life of a boy named Santiago who goes through many hardships and struggles and makes his dream come true by following it.

The story begins with a young boy named Santiago who spends his night with his herd below a sycamore tree. He had a dream about a treasure buried near the pyramids in Egypt. So, he begins his journey from Andalusia, Spain to the deserts of Egypt. In the way he meets a Gypsy woman, a man who calls himself a King who tells Santiago to look for signs and follow his heart. Santiago also trades all his sheep and sails to North Africa in a boat.

When he arrives to Northern Africa, a thief steals his all money. So, Santiago decides to look for a way to earn enough money to return home. He finds a work in a shop of crystal merchant where Santiago makes improvement in his economic condition. Later, Santiago joins a caravan travelling to Egypt and on the way he meets an Englishman who wants to learn the secret of alchemy from a famous Alchemist who lives at an oasis on the way to the pyramids. While travelling, Santiago begins to discover the Soul of the World. In the way, he meets an Arab girl named Fatima and falls in love with her. The caravan leader gathers the travelers and tells them that trivial warfare prevents them from continuing their journey.

Santiago arrives at the Egyptian Pyramids and begins to dig. He finds nothing there instead he again gets robbed by thieves. After Santiago tells the thieves about his dream, one of the thieves recounts his own dream about a buried treasure in the sacristy of an abandoned church. Santiago returns to Andalusia and goes back to the church where he had dreamt of the treasure near the Pyramids. He sleeps under the sycamore tree in which he had slept before starting his journey. In the morning, he digs where he slept what happens after that? Does he find THE TREASURE? To know that, you need to read the book.

I think this novel must be read by people all around the world especially students/youngsters as this novel teaches and encourages us to follow our dream. I would like to recommend this novel to everybody.